Below you will find a collection of press releases and event updates about the Chatham Area Business and Arts. Check back frequently for the latest news about upcoming events.

Columbia County is making a comeback, and the Chatham business and arts community is too! We are now in Phase IV of opening, which means most Chatham businesses, restaurants and food providers are open with modifications. Many of them are finding ingenious ways of offering open air dining, takeout food and drink, outdoor recreation and arts and in-store shopping. Come visit Main Street along with our members’ websites. See the updated list of Takeout and Dining Options and Boutique Shopping Options provided by Columbia County Tourism.

Corona Virus UpdateCABA is committed to helping our community in these uncertain times. We urge you to continue to support our local businesses however you can and please respect the rules our businesses are operating under this summer. 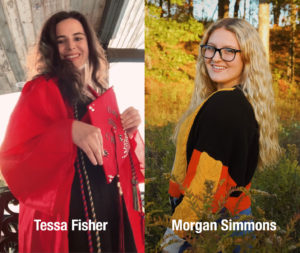 The Chatham Area Business and Arts Community Service Award, which recognizes a student who has shown a strong sense of community service, was awarded to Morgan Simmons.

The Chatham Area Business and Arts Personal Achievement Award, recognizing a student whose personal achievement has been exemplary, was awarded to Tessa Fisher.

We wish them both the best!

The board of CABA (Chatham Area Business and Arts) has accepted the resignations of both the group’s president, Debbye Byrum, and longtime Secretary Steve Campbell. A release from the board expressed regret at their departure.

Former board Vice President Tom Crowell, co-owner of Chatham Brewing, has stepped up to the position of president. Melony Spock has taken on the role of vice president and Cathi Bruneau, who recently became a CABA Board member, will take over as secretary.

Ms. Byrum cited a family health situation as her reason for leaving the board; Mr. Campbell noted both business and personal responsibilities.

Ms. Byrum, who joined CABA in 2016 under the name of her Main Street store, Willow & Oak, became President the following fall. In her resignation letter she noted that she had initiated the monthly CABA breakfasts, as well as serving as liaison to the Village of Chatham Board of Trustees.

“As we slowly emerge from the pandemic crisis, CABA will be needed more than ever to rally our community together. I am sad that I will not be able to be a part of that effort, but I am confident that the current board will provide the leadership needed to help shape the future of our community,” she wrote, adding, “I am proud that we were able to provide opportunities for us all to celebrate our community and support each other.”

Mr. Campbell, owner of Video Visions on Hudson Avenue, said he cannot remember how long he served as secretary to both the original Chatham Business Alliance (CBA) and its later renaming as CABA. “Everyone on this board is putting in an enormous amount of time to improve the organization and the community,” he said. “The board is a group of doers and should be proud of what they are accomplishing.”

There are now two vacancies on the CABA Board. Interested applicants can download the application form. The Board meets monthly at the Community Bank. For more information on CABA and CABA membership, visit the About CABA page. 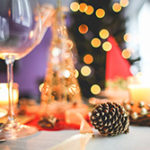 The Chatham Area Business and Arts’ holiday gathering will be held Wednesday, December 13 from 5:30-7:00pm. Join us at The People’s Pub, 36 Main Street, for cocktails, nibbles and holiday cheer.

This event is generously sponsored by The People’s Pub and Willow and Oak. 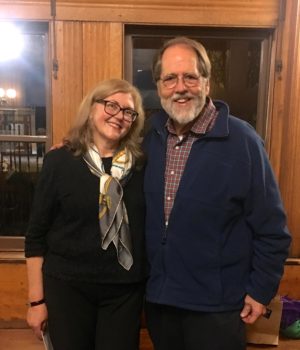 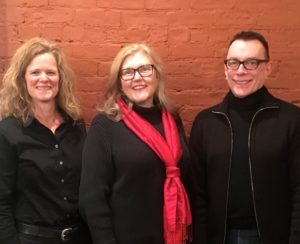 The Chatham Area Business & Arts organization held its annual membership meeting Thursday, November 16 at the Kinderhook Bank. It was both a celebration of new leadership and a goodbye to the outgoing leadership.

Thomas Chulak announced that he would be stepping down as president after the annual meeting. In a letter to the membership he said “After four years in this role, my personal life is changing and I need to open space for this new phase of life. I also believe that changing leadership is a good for an organization. I am proud of the work we have done together as we have reinvented CABA.”

Chulak was presented with a gift and thanked for his many years of leadership and for all he his efforts on behalf of the organization. Karen Kaczmar, who stepped down midyear as vice president, was also thanked for her work on the board.

In addition to welcoming new and bidding farewell to departing officers, members were updated about the organization’s 2017 efforts and successes. Festival activities were summarized and committee members were thanked for their work.

The Marketing Committee summarized their plans for a brochure to be distributed locally. The brochure will include a map of the village and will be funded with ads. These ads will be similar to those used to support the festivals brochures.

Membership was discussed. Reaching out to new members through a mailing of the area was debated, as was individual (non-business) memberships.

The next CABA board meeting will be held January 13, 2018, 8:30am at Kinderhook Bank. All are welcome to attend.

The Chatham Area Business & Arts (CABA) is a coalition of individuals, businesses and organizations who works to promote the Chatham, New York region as a vibrant, positive environment for shopping, dining, enjoying the arts and conducting business.

For over thirty years, Main Street retailers and other local business have taken part in a member-based organization to promote the local economy in the Village of Chatham, known as the Chatham Business Area Alliance.

Now, under the leadership of President Tom Chulak (co-owner of the Chatham Book Store), the membership has re-named the organization Chatham Area Business and Arts to reflect the growing importance of arts-related businesses and organizations in the Chatham area.

The Chatham Area is defined as the Village of Chatham plus the surrounding towns of Chatham, Austerlitz, and Canaan — the area served by the Chatham School District.

CABA’s vision is a reinvented organization that brings together economic and community development through connecting member organizations with one another and to the larger community. To ensure that all stakeholders are represented and to expand connections in new ways, CABA membership will be open to not only businesses, retailers, and not-for-profit organizations, but also arts organizations, community-based organizations, religious institutions, culinary arts professionals, artists, artisans, farmers and local food processors, home-based business owners, and individuals.

CABA also represents its members’ interests with the local municipalities and the county. The organization’s goal is to enhance our community in ways consistent with the Comprehensive Plans of the towns and village and focused on economic and community development.

“The economic and cultural vitality of the Chatham Area is interwoven with businesses and the arts,” said Tom Chulak. “Our reorganization and new name reflect this reality. “

Currently the CABA Festivals Committee that plans three festivals a year in the village (SummerFest, WinterFest, and OctoberFeast) and the Marketing Committee promotes the Chatham area through VisitChathamNY.com and social media and hosts bi-monthly CABA breakfast for networking and learning. In addition, CABA is in the process of establishing an Education Committee that will focus on CABA’s relationship with the Chatham School District and the Columbia Greene Community College.

About the CABA Reinvention Plan

It is proposed that we keep CABA as our acronym, but the letters shall stand for Chatham Area Business and Arts. The Chatham Area shall be defined by the boundaries of the Chatham Central School District.*

To connect the organizations, support their development and attract people to the area

Explore through various means collaboration and cooperation with other community organizations and initiatives including but not limited to:

* The Chatham Central School District includes The Village of Chatham and parts of the towns of Austerlitz, Canaan, Chatham and Ghent. 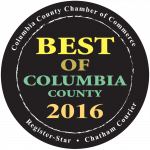 The third annual Best of Columbia County awards ceremony was held Thursday, June 23. More than 20 of the 90 categories were awarded to businesses, organizations and individuals from right here in Chatham, NY. Thank you to everyone who took the time to cast a ballot.

Congratulations to all of Chatham’s “Best of Columbia County 2016” Winners!

We invite you to come visit our little town and see why so many of our businesses were voted “Best in the County!” The awards were announced Thursday, June 23, 2016. See the list of all 90 winners.

Block in the County to Shop: Main Street in Chatham

The content may not be copied, distributed, republished, uploaded, emailed, posted or transmitted in any way without prior consent from the Chatham Area Business Alliance (for permission, please email ), except that you may print out a copy of the content solely for your personal use. In doing so, you may not remove or alter, or cause to be removed or altered, any copyright, trademark, trade name, service mark, or any other proprietary notice or legend appearing on any of the content.

Hyperlinks to sites are provided for convenience purpose only and are not affiliated with, nor imply endorsement by Chatham Area Business Alliance.