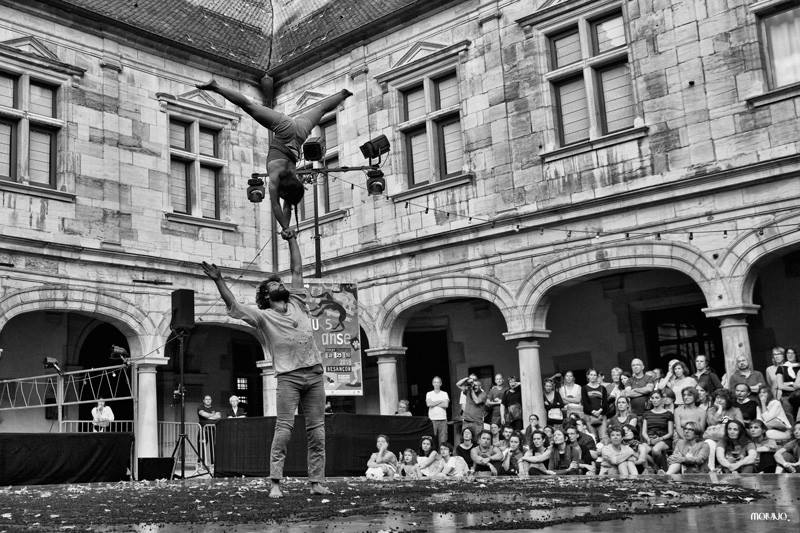 Phasmes and Hêtre, two signature works of Companie Libertivore, at PS21, December 21–22, 7 pm. Written and choreographed by Fanny Soriano with her trademark merging of dance and acrobatics, Phasmes (2017) is a duet that explores the intimate encounter between human beings and the natural world. It is a companion piece to the earlier Hêtre (2015), a solo work that dramatizes a young woman’s retreat from the world into a mysterious, dreamlike forest. Together they form a diptych, displays of aerial and earthbound movement both delicate and poetic, acrobatic and muscular. Tickets: $45 for non members; $30 for PS21 members; $20 for audiences under 18.

Phasmes
In Phasmes (phasmids, or stick insects), a mysterious figure on the dimly lit stage alters in appearance from galloping headless creature, to a delicate insect, to a creeping mass that resembles alien architecture. The figure soon reveals itself as two bodies behaving as one, unfolding and recoiling, assuming abstract and evocative forms. The performers, enthralled by the multiplicity of possibilities, continually shift their weight and balance, searching for a common center of gravity. Their movements, at times in harmony, at others in opposition, invent a new acrobatic language, sensuous yet disturbing, fragile yet brutal, questioning humans’ place in nature.​ “Pure, untamed animality, effortless grace and stunning technique.” Mathieu Dochtermann, Toute la Culture

Hêtre
A solo dance and acrobatic performance born of the vital need for solitude in a world where we are assailed by an endless flood of external stimuli clamoring for our attention, Hêtre—a play on the homophones “hêtre”(beech tree) and “être” (being)—traces the metamorphosis of a young woman, lithe and expressive, who, weaving and gliding, appears to melt into the gnarled limb of a beech tree that is the only other visible onstage presence during her reverie. Hêtre’s power stems from its cross-fertilization of dance and circus arts, its tenderness and simplicity, and the virtuosic grace of its representation of a young woman discovering a more intimate world.